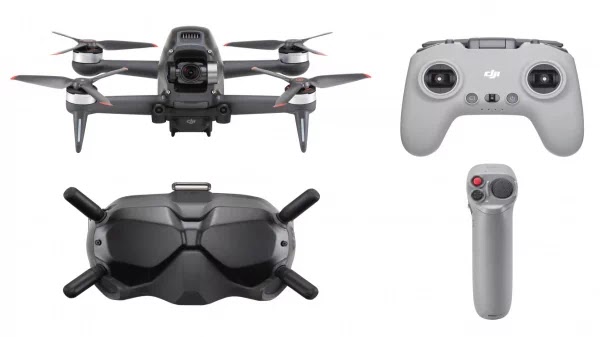 A number of impressive features of the DJI FPV make drone lovers want to maneuver, especially to explore in mastering every detail of the equipment. This can be seen from the shrewdness of the DJI FPV Drone which can fly at a maximum speed of 140 km per hour. The DJI FPV drone also only takes 2 seconds from rest to a speed of 100 km per hour.

FPV Drone can be controlled up to a distance of 10 kilometers with auto switching technology for network frequencies, bitrate of 50mbps and interference technology. In addition, this drone also offers the advantage that operators can use the DJI FPV V2 googles to see images clearly even at long distances from low latency.

another feature that is not less important is the safety feature. The DJI FPV Drone is equipped with emergency breaks and hovers to make the drone stop constantly during the flight so that the operator doesn"t have to worry about any problems.

The following are the advantages and disadvantages of the DJI FPV drone:

In general, the DJI FPV Drone has a very sophisticated sensor compared to other FPV drones. How come? This drone has a vision sensor, which consists of two cameras in front and two cameras below. Coupled with two TOF and one LED that can light up at night. If we pay attention, it is rare for other drones to fly at night, but this does not apply to DJI"s FPV drones because they have LEDs and these sensors.

Ability to take photos and videos on the same flight

Obstacle avoidance sensors on the front and bottom of the aircraft

The superior features and specifications of the DJI

FPV drone compared to other FPV drones are indeed very tempting. Not a few people are curious

to try the sensation of flying the drone, even though about 10% of people

have used an analog FPV drone before DJI launched

Unlike the DJI FPV, Analog has smaller googles and the transmission can be said to be like an old TV because the screen looks like an ant. It cannot be denied, this is because analog is made from 0 starting from assembly, purchasing boards, boards, propellers, and even setting parameters that are set by yourself. For this reason, the Dji FPV drone is superior because it offers a complete package, including the safety features in it.

The DJI FPV drone certainly provides an exciting experience and is different from other drones. The wide angle, just like the Osmo Pocket 2, offers a 150-degree field of view so that it spoils the eye with crystal-clear views. Data or video transmission to Google has also used a new transmission, namely using O3. For that, this drone offers a latency of under 28 ms so that what happens on the drone really looks real.

Based on its use, this FPV drone remote looks like a PS 5 remote, but it is fatter and has no grip. This remote also has an antenna with a wider range because it is a T-shaped with a relatively large size. In addition, there is also a motion controller commonly used by drone users.

For some people, the motion controller is quite popular because of its practical use, but this tool has its drawbacks, namely that it cannot use manual mode, such as doing flips and others. That is because this tool can only be used limited to normal mode or sport mode only, not intended for acrobatics.

In addition, this drone can also return to the user when the signal is lost or the battery is low. This makes the pilots not have to worry about the safety of the FPV while in the air.

Of course it is not surprising that drone lovers are tempted by the specifications offered by FPV. Turning to the price issue, it is certain that this drone is set at a higher price than traditional FPV drones.

If you want to buy this drone, then you have to spend in a bundling package ( DJI FPV Combo ) which is priced at IDR 19,999,000.00. In addition, there are also other components that are sold separately, such as two packages of Intelligent Flight Batteries and a charging hub which sells for 299 US dollars (around Rp 4.2 million) and the Motion Controller which is sold for 199 US dollars (around Rp 2, 8).

How? Do you think it is more worth it to use DJI"s FPV drones or traditional FPV drones?